Born on June 23, 1992, Ashley ShahAhmadi is an Iran-American journalist and the current sideline reporter and Hornets Live pre and post-game host. She has interviewed numerous NBA players, coaches, not to mention the die-hard fans of the Charlotte Hornets team.

Moreover, she also works as an On-Air Host for the Atlanta Braves as well as a digital reporter for FOX Sports. Also, she serves as a correspondent for CMT’s Hot 20 Countdown, where she interviews country music artists.

Ashley is 28 years old as of 2020, she was on June 23, 1992, in the United States of America to an Iran father and an American mother. She celebrates her birthday on June 23rd every year and her birth sign is Cancer. The beautiful reporter belongs to mixed ethnicity.

Blessed with considerable height with a slender body, Ashley is quite a natural charmer. She is a reporter w3ho has enthralled the whole world with tempting goods looks and inevitable talent. ShahAhmadi stands at a height of 5 feet 10 inches(1.77 m) and weighs about  132 Ibs (60 kgs).

Since she was a young kid, she dreams to become an NBA sideline reporter. Her passion for basketball took her to Marrieta Kell High School, where she developed unique shot-blocking skills. Her best memory as a basketball player during her days in high school is being the team second top scorer scoring half of the team’s point.

It was during her seventh grade when she was taken by her mother to witness one of the Atlanta Hawks games that gave Ashley the desire to become a sports reporter when she Saw a well-dressed lady with a microphone on her hands talking with Hawk’s head coach courtside.

The girl who wished her dream to come true eventually graduated in 2014 from the University of Georgia’s broadcast journalism school. Through her college time, it was up to her mother who took full responsibility to raised three kids on her own since the father walked out during Ashley’s freshman year in high school.  After graduating, she started looking for a job. She got her first shot in Meridian, Miss, covering sports games.

Born and raised in the United States by an Iran father who emigrated to America at the age of 14. At adult age, he married Ashley’s mother Cheryl Rebeshke of Saint Cloud, Minn. Ashley grew up in Atlanta, Georgia alongside her two brothers Aryon and Brandon.

ShahAhmadi has not gone public with her relationship, it is not publicly known whether she is married or in a relationship. Her partner will be updated as soon as possible.

The acclaimed sports journalist ShahAhmadi has managed to keep a low-profile, she hasn’t revealed any kind of information regarding her boyfriend or her fiance. Despite being a well-known broadcaster in the world of sports, details about her dating history seem to be under wrap.

ShahAhmadi’s annual salary is estimated to be about $100,000 as a sideline reporter and Hornets Live pre and post-game host.  Besides, she also works as an on-air host for Atlanta Braves, as a CMT correspondent, likewise, as a digital reporter for FOX Sports in Atlanta, GA.

Ashley’s net worth is estimated to be between $500, 000- $1 million dollars as of 2020. This includes her assets, money, and income. Her primary source of income is her career as a Sideline Reporter and Host. Through her various sources of income, ShahAhmadi has been able to accumulate a good fortune but prefers to lead a modest lifestyle.

Here are some interesting facts and body measurements you should know about Ashley ShahAhmadi.

After graduating from the University of Georgia (Go Dawgs!) in 2014, she heads to Mississippi, in Meridian at WTOK-TV where she began her broadcast career as anchoring the 6 and 10 o’clock sports reports and got to cover college teams at Alabama, Mississippi State, Ole Miss, and Southern Miss. In 2016, Ashley moved to Jackson to work as the weekend sports anchor at WAPT-TV.

In 2018, it was time to come back to her home state in Atlanta, where she was offered a role as Social Media Content Producer/Host for Fox Sports South/Southeast. Later she started working as filling in broadcaster for Charlotte Hornets. It was long after that, Ashley got promoted to a higher position as a full-time sideline reporter and is also featured on Hornets Live pre and post-game as the host.

ShahAhmadi has additionally been working as an on-air host for Braves Live, a thirty-minute pre and post-game show that preview breaks-down the game. Besides, she also serves as a digital reporter for FOX Sports since May 2018. 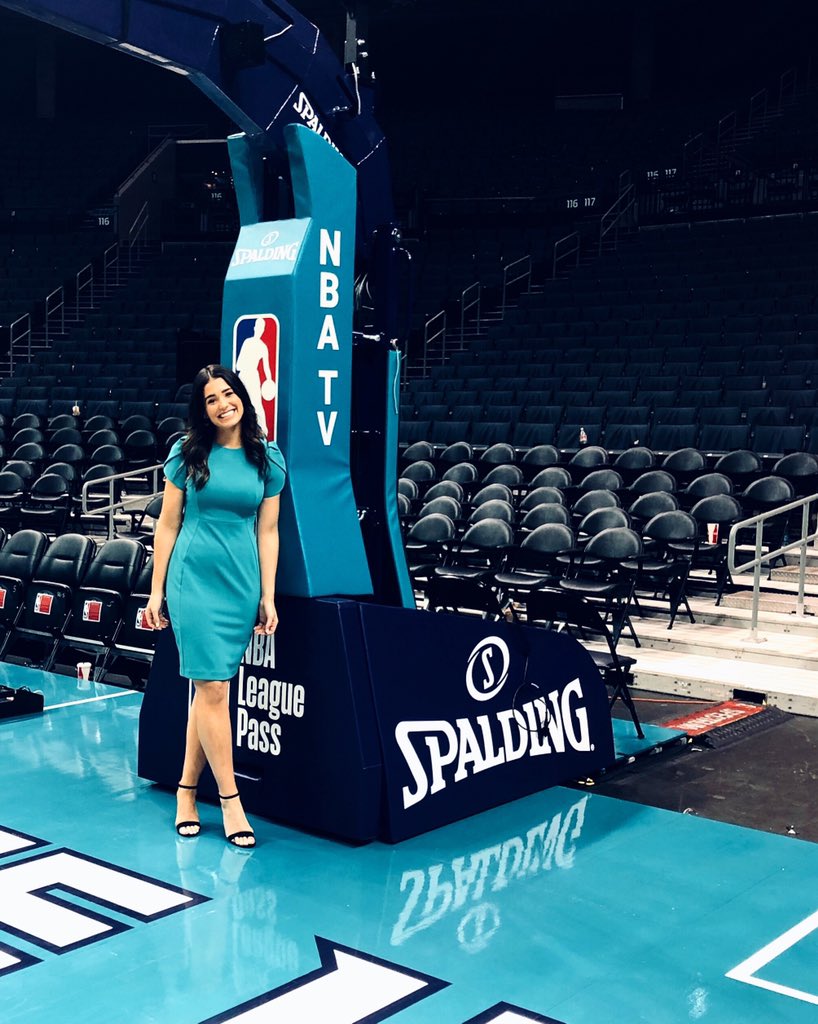 Who is Ashley ShahAhmadi?

ShahAhmadi is a well-known sideline reporter and Hornets Live pre and post-game host. She has interviewed numerous NBA players, coaches, not to mention the die-hard fans of the Charlotte Hornets team.

How old is Ashley ShahAhmadi?

How tall is Ashley ShahAhmadi?

How much is Ashley ShahAhmadi worth?

Ashley’s net worth is estimated to be between $500, 000- $1 million dollars as of 2020. This includes her assets, money, and income. Her primary source of income is her career as a Sideline Reporter and Host

How much does Ashley ShahAhmadi make?

ShahAhmadi’s annual salary is estimated to be about $100,000 as a sideline reporter and Hornets Live pre and post-game host.  Besides, she also works as an on-air host for Atlanta Braves, as a CMT correspondent, likewise, as a digital reporter for FOX Sports in Atlanta, GA.

Where does ShahAhmadi live?

Is ShahAhmadi dead or alive?

Where is ShahAhmadi Now?

Ashley is pursuing her career in journalism. She is working as a sideline reporter for Charlotte Hornets since September 2018 and as an on-air host for Atlanta Braves since 2018 June 2018.