The England born actor, and producer, Dominic Purcell is popularly known for his role as Lincoln Burrows in Fox’s Prison Break and Mick Rory or Heat Wave in The series  The Flash and Legends of Tomorrow, and Arrow

Talking about his education, Purcell attended Blaxland East Public School and Blaxland High School, then later join St Dominic’s College and McCarthy Catholic College, Emu Plains. After acquiring his degree, he decided to continue his studies while joining the Australian Theatre for Young People. Besides, he joined his counterpart  Hugh Jackman at the Western Australian Academy of Performing Arts.

Purcell started his career in the TV series ‘Home and Away’ in which he portrayed the role of Constable Rogers. His role was limited for 3 episodes only and was never featured in any shows and movies till 1997. In the year 1997, he was given the role of Granger Hutton in the Series Raw FM for the 13 episodes. This was his breakthrough point; his acting was liked by many producers and was hired for his debut film First Daughter in the year 1998, which was premiered in the year 1999.

The protagonist character in the blockbuster series Prison Break. Purcell portrays Lincoln Burrows alongside Michael Scofield( Wentworth Miller). While in the show, Purcell plays as a prisoner, sentenced for death for the murder of Vice President of America brother Terrence Steadman, the accusation he actually didn’t intend to do. On the other hand, Scofield steps in to help his brother escape prison. Burrows and Scofield have been the leading actor since the premiere of the show on August 29, 2005, until its final episode on May 15, 2019. They both appeared in more than 90 episodes.

Another character Purcell is well known for is Mick Rory or perhaps known as  ”Heat Wave”. He has played as Mick Rory in the CW’s The Flash appearing only in five episodes. Purcell still reprised his character in CW series like Arrow, Supergirl, Legends of Tomorrow, and Superhero Fight Club.

Dominic Haakon Myrtved Purcell was born on  17th February 1970, in Wallasey, Cheshire, in the UK. He has triple citizenship as an Australian, Irish, and England. Born in England, but rise in Australia. He constantly celebrates his birthday on the 13th of February every year.

The Prison Break star Purcell is the son of Mary T.  Hassett( Maureen) and Phil Myrtedt ( father). Moreover, his father comes from Norway and has a French descent, while his mother is Irish. Meanwhile, he moved to New South Wales, in Australia with his parents when he was 2 years old, then after a few months, they relocate to Western Sydney

Dominic Purcell and AnnaLynne McCord began dating in 2011 and split in 2014. AnnaLynne came back to his life after he was diagnosed with skin cancer. She returns back into Purcell’s life as a friend, to help him on his doctor’s appointments. Even since then, McCord has been close to Purcell, even though they broke up a few years back, but they still see each other frequently. Besides, most of the AnnaLynne spend quality time with Purcell’s kids, actually, she lives with them in her home, the kids are family to her

Dominic Purcell began dating Rebecca Williamson in August 1997 and they got married in August 1998. They have four children Augustus Purcell, Joseph Purcell, Lily-Rose Purcell, and Audrey Purcell. The couple’s relationship ended with a divorce on 22nd October 2003.

The 2007 AACTA Award winner, Purcell has an estimated net worth of 8 million U.S dollars. Indeed, he has earned from his successful career as an actor and producer.

On 1 June 2016 Dominic Purcell suffered severe injuries on set in Morocco, after a misplaced iron bar used as a Prison Break season 5 set piece had fallen onto his head. The actor was immediately airlifted from Marrakesh to Casablanca, where he received emergency treatment for nasal fractures and various other injuries.

Dominic Purcell has a tattoo on the wrist with the text ‘Family is life’. He has a tattoo on both his shoulders. The left shoulder’s tattoo looks like a world map with a big compass on it. This tattoo has his 4 children’s initials on this compass like 4 directions E, W, S & N. The right shoulder’s tattoo is again a big one and looks like the part II of the world’s map or something like that. 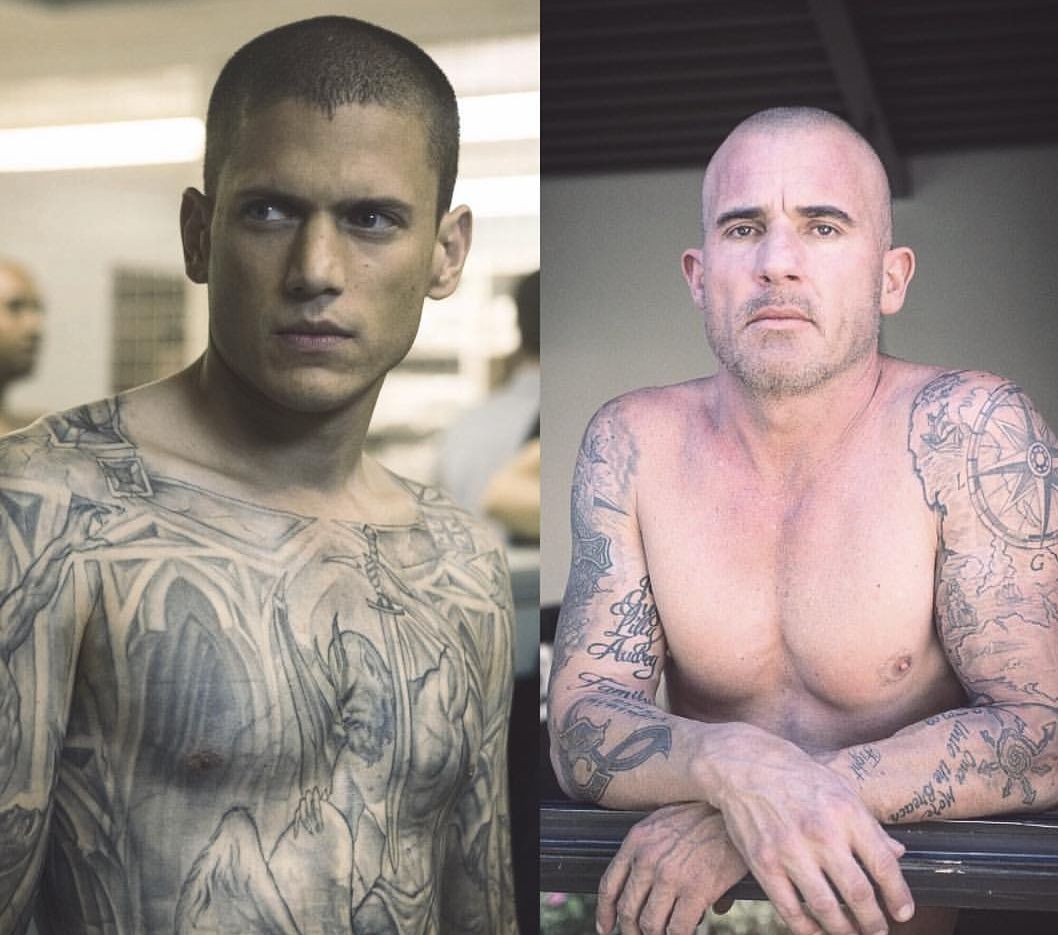 Who is Dominic Purcell?

He is one of England’s best-known actors and producers. Therefore, he is best known for his role as Lincoln Burrows in Prison Break, Drake in the 2004 film Blade: Trinity, and currently as Mick Rory in the CW’s The Flash, and Legends of Tomorrow.

How old is Haakon Myrtved Purcell?

How tall is Purcell?

He stands at a height of 6 feet 1 tall

Yes, of course, he was previously married to Rebecca Williamson, however, before the end of 2003, the marriage life collapse. For more than 5 years, Purcell and Rebecca were able to have four children, firstborn Augustus, Joseph Purcell, Lily-Rose Purcell, and Audrey Purcell

How much is Dominic Purcell worth?

Purcell is an accomplished actor who has an estimated net worth of $8 million U.S dollars

Where does Purcell live?

Because of security reasons, Purcell has not shared his precise location of residence. We will immediately update this information if we get the location and images of his house.

Is Purcell dead or alive?