Ed Sheeran (Edward Christopher Sheeran) is a highly-acclaimed Grammy-winning singer and songwriter known for hit songs like ‘Thinking Out Loud,’ ‘Photograph,’ ‘Shape of You’ and ‘Perfect.’

Ed stands at an average height of 5 feet and 7 inches.

Sheeran was born in Halifax, the UK on 17 February 1991. He has an older brother named Matthew who works as a composer. Sheeran’s parents, John and Imogen, are from London. His paternal grandparents are Irish, and Sheeran has stated that his father is from a “very large” Catholic family.

Ed Sheeran began singing in the local church choir from the age of four, learned to play the guitar at a very young age during his time at Rishworth School, and began writing songs while at Thomas Mills High School in Framlingham. In 2004 Ed Sheeran began recording music and independently released his first collection of work, Spinning Man. In 2008 he moved to London and began playing in small venues. In 2008, he auditioned for the ITV series, Britannia High.

He also opened for Nizlopi in Norwich in April 2008, after being one of their guitar technicians. In 2009 Ed Sheeran released another EP, You Need Me, just before going on tour with Just Jack. He also did a few collaborations with Essex singer, Leddra Chapman, including CeeLo Green’s “Fuck You”.

In February 2010, Sheeran posted a video through SB.TV and rapper Example invited Sheeran to tour with him. In the same month, he also released his critically acclaimed Loose Change EP, which featured his future debut single, “The A-Team”. In the autumn of 2009, Sheeran began studying music at the Academy of Contemporary Music (ACM) in Guildford, Surrey as an undergraduate.

From March to September 2013 he played at arenas and stadiums across North America as the opening act for Swift’s The Red Tour. According to Sheeran, it was then his biggest tour and he added a scarlet RED tattoo to commemorate it.

On a roll, Sheeran’s next success would come when his song “I See Fire” was featured in the movie The Hobbit: The Desolation of Smaug, and in June 2014, his next album, x, appeared, debuting at No. 1 in the United States and the United Kingdom. The project featured three Top 10 singles  “Don’t,” “Photograph” and “Thinking Out Loud”  with the latter winning the Grammy for Song of the Year and Best Pop Solo Performance in 2016.

In 2016, Sheeran took a hiatus to work on his third studio album, ÷. In January 2017, he released two singles from the album, “Shape of You” and “Castle on the Hill,” which debuted at No. 1 and No. 6, respectively, on the Billboard Hot 100. Sheeran subsequently released in March 2017 and announced a world tour. His new album broke a Spotify record for first-day album streams with 56.7 million listens in 24 hours.

In late 2017, Sheeran delivered another hit with the love song “Perfect,” also released as a joint effort with Beyoncé, titled “Perfect Duet.” The original version hit No. 1 on the Billboard Pop Songs and Adult Pop Songs charts in mid-January 2018. Later that month, Sheeran added to his Grammy haul by winning Best Pop Solo Performance for “Shape of You” and Best Pop Vocal Album for ÷.

May 2019 brought the release of the Sheeran-Justin Bieber track “I Don’t Care,” the first single from Sheeran’s upcoming studio album, No.6 Collaborations Project. An immediate success, “I Don’t Care” established a new single-day streaming record for Spotify. The English hitmaker followed with the singles “Cross Me,” with Chance the Rapper and PnB Rock, and “Beautiful People,” with Khalid. 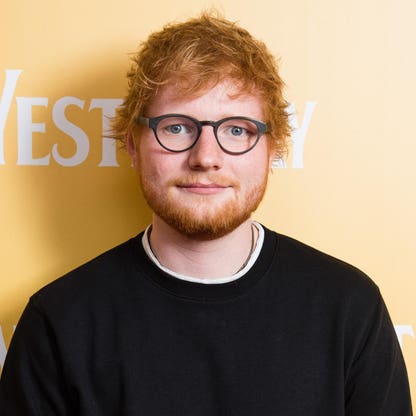 In 2012 Ed Sheeran was in a relationship with Scottish singer-songwriter Nina Nesbitt (who was in his music video for “Drunk”). She is the subject of Sheeran’s songs, “Nina” and “Photograph” but they later broke up.

In January 2014 Ed Sheeran was in a relationship with Athina Andrelos, who works for British chef Jamie Oliver. She is the inspiration of Sheeran’s song, “Thinking Out Loud”. They broke up in February 2015.

Ed Sheeran’s girlfriend is Cherry Seaborn who has been his crush since high school. She is the inspiration behind the song ‘Perfect’.During an interview with Us Weekly Entertainment Director Ian Drew he said that “the line that goes, ‘Barefoot on the grass, listening to our favorite song’ was about when we were in Ibiza listening to Future’s March Madness literally not wearing any shoes and going mental on the lawn, which was quite a nice time.

Ed has an estimated net worth of 65 million dollars as of 2019. He has amassed this amount from his leading roles in the entertainment industry.

In August 2015 Ed Sheeran launched a record label, ‘Gingerbread Man Records’, which is a deal with Warner Music Group. The first signee to the label was Jamie Lawson who they met in London’s folk circuit. Lawson released his self-titled debut album on 9 October 2015, which has earned him a number one in the UK Albums Chart. Sheeran signed his second artist, Foy Vance, in November 2015.

“Perfect” is a song from Ed’s third studio album “Divide”.  After the album’s release, it charted at number four on the UK Singles Chart. On 21 August 2017, Billboard announced that “Perfect” would be the fourth single from the album. The song was serviced to pop radio on 26 September 2017 as the third single from the album in the United States (fourth overall).

The song eventually reached number one on the UK Singles Chart and the US Billboard Hot 100 in December 2017. “Perfect” became the UK Christmas number-one song for 2017 and also peaked at number one in sixteen other countries, including Australia, Canada, Ireland, and New Zealand.

Ed Sheeran Shape Of You

“Shape of You” is a song by Ed. It was released as a digital download on 6 January 2017 as one of the double lead singles from his third studio album ÷ (2017), along with “Castle on the Hill”.

The dancehall-infused pop song was written by Ed Sheeran, Steve Mac, and Johnny McDaid. Due to its interpolation of “No Scrubs” by TLC, Kandi Burruss, Tameka “Tiny” Cottle, and Kevin “She’kspere” Briggs are also credited as writers. The song was produced by Sheeran and Mac.

On 10 December 2018, the song became the first song to hit 2 billion streams and the most streamed song on Spotify. It was also the most-streamed song of the decade on Spotify with 2.4 billion streams by December 2019.[8] It was the best-selling song of 2017 and the decade in the UK. “shape of You” was the best selling-song of 2017 and the best selling digital song worldwide, with combined sales and track-equivalent streams of 26.6 million units according to IFPI.

In 2018, it sold additionally 14.9 million copies and made a second appearance in the Billboard Year-End, at No. 71. The song won the Grammy Award for Best Pop Solo Performance at the 60th Annual Grammy Awards. Billboard ranked “Shape of You” as the ninth most successful song of all-time, as the magazine celebrated the Hot 100’s 60th anniversary.

At first glance, Ed Sheeran and Justin Bieber might seem very different. One is Canadian, the other is British. One became famous as a teen on YouTube, and the other just mysteriously showed up at the top of the charts one day. One only dabbles in facial hair, while the other has shaped his entire personal brand around it. But the two released a new collaborative single on Friday, called “I Don’t Care,” and it proves that they do have plenty in common.

They’re both men in their twenties with syrupy-sweet high voices that are practically interchangeable on the track. Both were married in secret ceremonies last year—Bieber to model Hailey Bieber (née Baldwin), and Sheeran to childhood friend Cherry Seaborn. Both are prone to public displays of affection: in Bieber’s case it was a Vogue cover; in Sheeran’s, a large sign on his property that bears his wife’s middle name. Both insist upon wearing bright colors and patterns, which can be seen in this outtake from a recent photoshoot posted to Sheeran’s Instagram:

“I Don’t Care,” despite its dismissive-sounding name, is actually a love song. See, they don’t care about how much they hate the party they’re at because they are there with the people they love. That the sentiment could apply to both is clear.

Who is Ed Sheeran?

Ed Sheeran (Edward Christopher Sheeran) is a highly-acclaimed Grammy-winning singer and songwriter known for hit songs like ‘Thinking Out Loud,’ ‘Photograph,’ ‘Shape of You’ and ‘Perfect.’

How old is Ed Sheeran?

How tall is Ed Sheeran?

Ed stands at an average height of 5 feet and 7 inches.

In 2012 Ed Sheeran was in a relationship with Scottish singer-songwriter Nina Nesbitt (who was in his music video for “Drunk”). She is the subject of Sheeran’s songs, “Nina” and “Photograph” but they later broke up.

In January 2014 Ed Sheeran was in a relationship with Athina Andrelos, who works for British chef Jamie Oliver. She is the inspiration of Sheeran’s song, “Thinking Out Loud”. They broke up in February 2015.

Ed Sheeran’s girlfriend is Cherry Seaborn who has been his crush since high school. She is the inspiration behind the song ‘Perfect’.During an interview with Us Weekly Entertainment Director Ian Drew he said that “the line that goes, ‘Barefoot on the grass, listening to our favorite song’ was about when we were in Ibiza listening to Future’s March Madness literally not wearing any shoes and going mental on the lawn, which was quite a nice time.

How much is Ed Sheeran worth?

He has an approximate net worth of $65 million. This amount has been accrued from his leading roles in the entertainment industry.

Where does Ed Sheeran live?

Because of security reasons, He has not shared his precise location of residence. We will immediately update this information if we get the location and images of his house.

Is Ed Sheeran dead or alive?

Where is Ed Sheeran Now?

He is currently one of the most successful singers and songwriters in the United Kingdom and generally in the world.

This just really saddened me. I hung out with Mac a few times over the years and he was always such a sweetheart, always had the time of day for anyone, whoever they were. As well as being a great talent, he was a great human. Love and prayers to his family and friends. I don’t know what else to say. It’s so heartbreaking.