Gunna (Sergio Giavanni Kitchens) is an American rapper from College Park, Georgia. He’s currently signed to Young Thug‘s YSL Records and to 300 Entertainment. Gunna made a name for himself with the ‘Drip Season’ mixtape series. His discography also includes Drip or Drown 2 (2019) and Drip Harder (2018) with Lil Baby. He’s collaborated with Lil Uzi Vert, Lil Yachty, Kap G and Metro Boomin among others.

He was born in College Park, Georgia. Sergio was raised by his mother along with his four other siblings, One of his brothers passed away in 2006. Gunna is a high school graduate. He grew up listening to acts such as Future, Outkast, Young Thug, Cameron, and Jim Jones.

Sergio started out rapping at age 13 as a hobby. His first project, Hard Body, was released in June 2013 by SPC Entertainment. It featured tracks like “We Live This”, “Faded” and “I’m Not a Criminal.” In 2016, Gunna was introduced to Atlanta rapper Young Thug by a mutual friend.

He signed to Young Thug’s YSL imprint in 2016. His first project on the label ‘Drip Season’ was released in October 2016. It featured guest appearances from Nechie and Duke. The second installment of the ‘Drip Season’ series followed in May 2017. The tape includes songs like “Phase”, “Belly of The Beast” and “YSL” featuring Playboi Carti. Rappers Hoodrich Pablo Juan, Offset and Shad Da God also appeared on the project.

His debut EP, Drip or Drown, with Wheezy was released in November 2017. The track-list includes “Paid”, “Dodge the Hate” and “Don’t Play With It” featuring Young Thug. His breakout mixtape, Drip Season 3, arrived in February 2018. It charted at #55 on the Billboard 200 and #20 on the Top Rap Albums chart.

The joint project, Drip Harder, with Lil Baby arrived in October 2018. It was released by labels YSL, Quality Control, Capitol and Motown Records. The tape’s first single “Sold Out Dates” was released back in April 2018. It currently has more than 38 million plays on YouTube. Drip Harder peaked at #4 on the Billboard 200. It was supported by tracks “Drip Too Hard” and “Close Friends.” In February 2019, Gunna’s debut album, Drip or Drown 2, premiered at #3 on the Billboard 200. It was led by tracks “One Call” and “Speed It Up.” 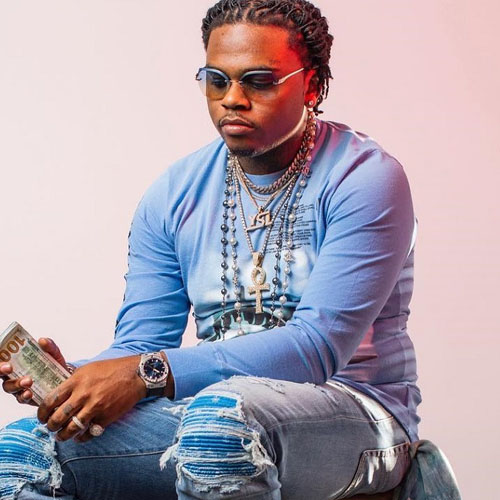 In as much as Gunna may be relatively considered a public figure due to the nature of his work, not much of his personal life is known to the public. This may be attributed to the fact that he covers the newsmakers and not his own story. Or, He is a very private person who keeps his personal life under wraps away from the ever prying eyes of the media.

Gunna got worldwide recognition thanks to his collaboration with Lil Baby. They together released the song called “Drip Too Hard” in 2018. The song peaked at the 4th position on the Billboard Hot 100 music chart. The video “Drip Too Hard” being dropped on Youtube in October 2018 accumulated 28.5 million views. Gunna has already made a net worth of over $4.5 million thanks to his success in music.

He released his debut studio album titled Drip or Drown 2 on February 22, 2019, under YSL and 300 recording labels. It peaked at the 3rd spot on the US Billboard 200 list, and at the 5th spot on Billboard Canadian Albums chart, both in March 2019.

Thugger gets a call to go right into action when he hears that Gunna’s in trouble. Thug throws on his fireman gear and drives the Slime F.D. truck to the scene, where Gunna is on fire inside while calmly writing a note like nothing is happening around him. Once the So Much Fun rapper gets face-to-face with his ATL pupil, the house explodes from the blaze.

The scene switches to Travis Scott on the gridiron, as he delivers his smooth assist surrounded by the marching band, but the fire somehow finds its way onto the football field. The blaze eventually hits each of the marching band members, who are lined up to spell out “Hot” like the track’s cover art.