Val Kilmer born (Val Edward Kilmer) is an American actor, musician, and artist. He started off as a stage actor and later became popular in the mid-1980s after a string of appearances in comedy films, starting with Top Secret! of 1984 and Real Genius of 1985, as well as the military action film Top Gun of 1986, the fantasy film Willow (1988), and the western Tombstone of 1993.

Val was enrolled at  Berkeley Hall School, a Christian Science school in Los Angeles, until ninth grade.  He later joined  Chatsworth High School with Kevin Spacey and Mare Winningham and as well attended the Hollywood Professional School. Val became the youngest person at the time to be accepted into the Hollywood Professional School, where he was a member of Group 10.

Val was born in Los Angeles to  Gladys Swanette and Eugene Dorris Kilmer, an aerospace equipment distributor and real estate developer. His mother was of Swedish descent while his father’s ancestry included English, Scots-Irish, French, and German. At the age of 8 years, his parents divorced in 1968. His grandfather was a gold miner in New Mexico, near the border with Arizona.  Val’s younger brother Wesley drowned in a swimming pool at age 15 in 1977; their father died in 1993.

He married actress Joanne Whalley and they were together from March 1988 to February 1996. The pair met while working together on the film Willow. They  had two children: a daughter, Mercedes was born on  October 29, 1991, and a son, Jack who was born on  June 6, 1995. Val is currently single. 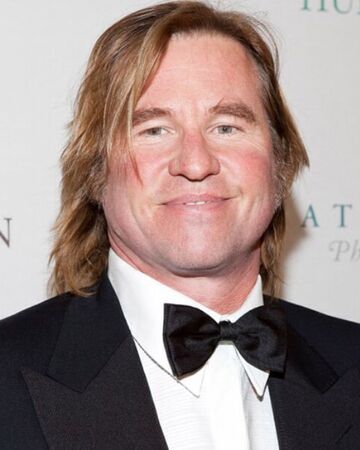 Here are some interesting facts you don’t want to miss about XY.{more}

He performed on stage in New York, in 1984 and thereafter made his film debut in the spy spoof Top Secret! He had supporting parts, including the roommate in Real Genius of 1985 and “Iceman” in Top Gun of 1986, he later earned his breakthrough role in 1991 as rock icon Jim Morrison in Oliver Stone’s The Doors. The film made Val show off another talent, as his own singing voice was recorded for the soundtrack. With his success, he featured other American legends in two of his next films: gunslinger Doc Holliday in Tombstone of 1993 and the spirit of Elvis Presley in True Romance of 1993. It  Kilmer earned a reputation for being difficult to work with and he clashed with Michael Apted while working on Thunderheart in 1992, and with Joel Schumacher during the filming of Batman Forever (1995).

After refusing to repeat the Bruce Wayne role, He broke his Batman contract and signed on for the crime thriller Heat in 1995, along with Robert De Niro and Al Pacino. He was featured along with Michael Douglas in The Ghost and the Darkness in 1996. In the late 1990s, he delivered a string of less-than-successful performances, including in the films The Saint of 1997, At First Sight in 1999 and Joe the King in 1999. He lends his voice to the role of Moses in the animated film The Prince of Egypt in 1998, he returned to form as a tormented drug addict in The Salton Sea (2002).

He was featured as Philip II of Macedon in Alexander, appearing alongside Angelina Jolie and Colin Farrell, and he later played FBI agent Paul Pryzwarra in the 2006 film Déjà Vu, starring Denzel Washington in 2014. He later earned notable roles in Conspiracy in 2008, Double Identity in 2009 and The Traveler in 2010, while voicing the supercar KITT in a reboot of the hit 1980s series Knight Rider. He continued featuring in films across a range of genres, including the farcical comedy MacGruber in 2010 and the horror flick Twixt (2011). The actor also returned to voice work for the Disney feature Planes (2013) and, after years of planning a project about Mark Twain, he played the famed writer in Tom Sawyer & Huckleberry Finn (2014).

He appeared in the romantic drama Song to Song and the suspenseful The Snowman in 2017. In 2018 it was announced that Kilmer would be reprising the role of Iceman alongside Tom Cruise’s Maverick for the long-awaited sequel to Top Gun, scheduled for a July 2020 release.

At the moment, we do not have the exact salary and net worth of him but we’ll keep tabs and update once it is available. However, this section is under review, we will update you when details about his net worth are revealed.

He has enjoyed a long career in the journalism industry spanning almost three decades. Through proceeds from his work as an Actor. he has been able to accumulate a huge fortune. He is estimated to have a net worth of about $25million.

Val Kilmer Health  Death and  What Happened To Val Kilmer

Val is still alive. He was hospitalized in January 2015 for what his representative said were tested for what could be a possible tumor. He shared on tweeter, “I have not had a tumor, or tumor operations, or any operation. I had a complication where the best way to receive care was to stay under the watchful eye of the UCLA ICU.”  Previously after denying persistent rumors that he had been diagnosed with cancer, he said in April 2017 that he had a “healing of cancer”.  In a profile for The Hollywood Reporter, it was revealed that Val  had a “two-year battle with throat cancer…and a procedure on his trachea has reduced his voice to a rasp and rendered him short of breath.”

Following roles in the television films The Murders in the Rue Morgue and The Man Who Broke 1,000 Chains, He featured as Madmartigan in the fantasy Willow.  He met his future wife, co-star Joanne Whalley, on the film’s set.

He featured as Simon Templar in the popular action film, The Saint in 1997.  He looked forward to the title role as a change toward a more fun, less serious action thriller while enjoying the “master of disguise” chameleon characters like a mad artist, a nerdy British scientist, a cleaner, and a Russian mob boss. He as well wrote the poetry in the film. For the movie, he received a salary of $6 million. The Saint was a financial success, grossing $169.4 million worldwide.

Val Kilmer has an odd growth on his left elbow that is quite well seen in the film Heat, he broke his arm while filming The Doors when he performed a jump from the stage into the crowd but the stuntman failed to catch him.

After several delays, director Oliver Stone finally began production on the film The Doors. The film based on the band of the same name. Val  spoke with Oliver Stone early on, concerned about what he might want to do with the story because he  didn’t believe in or want to promote substance abuse.

He saw Morrison as having picked the wrong heroes, who had different issues, that were not part of the creativity or inspiration. He also saw Morrison’s story as one that could be told “a thousand different ways” and didn’t want to tell it by playing the role in the style of drugs, with which Oliver Stone agreed.

He memorized the lyrics to all of lead singer Jim Morrison’s songs prior to his audition, and sent a video of himself performing some Doors songs to director Stone. However Stone was not impressed with the tape, but Paul Rothchild (the original producer of The Doors) said “I was shaken by it” and suggested they record Val in the studio. After Kilmer was cast as Morrison, he prepared for the role by attending Doors tribute concerts and reading Morrison’s poetry.

Val  appeared in Song to Song in 2017,opposite Rooney Mara and Ryan Gosling and directed by Terrence Malick.  He also appeared in the 2017 film,The Snowman opposite Michael Fassbender and Rebecca Ferguson and directed by Tomas Alfredson. It was confirmed on June 7, 2018 Val would be reprising his role as Lt. Tom “Iceman” Kazanski for the upcoming Top Gun sequel Top Gun: Maverick.

Batman Forever director Joel Schumacher in December 1993 he had seen Tombstone and was most impressed with Kilmer’s performance as Doc Holliday. He felt that Val to be perfect for the role of Batman, though at the time, the role was still Michael Keaton’s. Keaton in July 1994 he decided not to return for a third Batman film after 1992’s Batman Returns, due to “creative differences”. William Baldwin who previously worked with Schumacher on Flatliners was reported to be a top contender, though just days after Keaton dropped out,Val was cast.  He took the role without even knowing who the new director was and without reading the script.

Batman Forever was released in June 1995. It was a success at the box office, despite receiving mixed reviews from critics. There was debate about Val’sperformance: some critics, like The New York Times’ Janet Maslin, thought Kilmer was a poor successor to Keaton in the part;  while others, such as Roger Ebert, had kind words for him. Bob Kane Batman creator  said in a Cinescape interview that of all the actors to have played Batman up to that point, he felt Val had given the best interpretation. Leonard Maltin film critic  who criticized the dark tone contained in Batman Returns complimented val’s portrayal when he reviewed the film for his expanding collection of film reviews.

Batman Forever defenders praised the film for portraying Batman as a more heroic, less ruthless, and more human character than in the Tim Burton films. This film also brought the film interpretation of Bruce Wayne more into line with his comic book counterpart, showing him as a socialite and a very public figure rather than the neurotic recluse of the previous films. Val in February 1996 he decided not to return for another Batman feature film, feeling that Batman was being marginalized in favor of the villains.  and because of their scheduling problems with The Saint. Val was replaced by George Clooney as Batman in 1997’s Batman & Robin. There were also reports that Val had not had a good working relationship with Schumacher, as another reason for not reprising the role.

Who is Val Kilmer?

He is an accomplished American actor, musician, and artist.

How old is Val Kilmer?

How tall is Val Kilmer?

No, He married actress Joanne Whalley and they were together from March 1988 to February 1996. The pair met while working together on the film Willow.

How much is Val Kilmer worth?

He has an approximate net worth of $25 million. This amount has been accrued from his leading roles in the entertainment industry.

How much does Val Kilmer make?

At the moment, we do not have the exact salary and net worth of him but we’ll keep tabs and update once it is available.

Where does Val Kilmer live?

Because of security reasons, he has not shared his precise location of residence. We will immediately update this information if we get the location and images of her house.

Is Val Kilmer dead or alive?