Daniel Craig is an English actor.He was born in 1968 2nd of March in Chester, Cheshire. His mother, Carol Olivia , was an art teacher, and his father, Timothy John Wroughton Craig, was the landlord of the pubs Ring o’ Bells in Frodsham, Cheshire and the Boot Inn in Tarporley, Cheshire, having served as a midshipman in the Merchant Navy.

Daniel  Craig has one daughter and one step daughter.

In 1998, he won Love Is the Devil: Study for a Portrait of Francis Bacon.

In 200, he also won best actor of some voices.In 2007, he won the best actor in empire awards,Evening Standard British Film Award and best foreigner actor in Sant Jordi Award.

In 2012 he worn best british actor of the year in Sant Jordi Award and best action movie actor in Critics’ Choice Award.

His film debut was in the drama The Power of One 1992. Other early appearances were in the Disney family film A Kid in King Arthur’s Court 1995 and the biographical film Elizabeth(1998), as well as in the historical war drama television series Sharpe’s Eagle (1993) and the action-adventure drama series Zorro. Cast as the British secret agent James Bond in October 2005, his first film in the role, Casino Royale, was released internationally in November 2006. 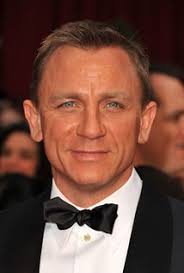 Craig’s appearances in the British television film Love Is the Devil: Study for a Portrait of Francis Bacon (1998), the indie war film The Trench 1999, and the drama Some Voices 2000 attracted the film industry’s attention. This led to roles in bigger productions such as the action film Lara Croft: Tomb Raider 2001, the crime thriller Road to Perdition 2002, the crime thriller Layer Cake 2004, and the Steven Spielberg historical drama Munich 2005. Craig achieved international fame when chosen as the sixth actor to play the role of Ian Fleming’s James Bond in the official film series, taking over from Pierce Brosnan in 2005. Although his casting was initially greeted with scepticism, his debut was highly acclaimed and earned him a BAFTA award nomination, with Casino Royale becoming the highest-grossing in the series at the time. Quantum of Solace followed two years later.

Craig’s third Bond film, Skyfall, premiered in 2012 and is currently the highest-grossing film in the series, was the highest-grossing film in the UK until 2015 and the fifteenth highest-grossing film of all time. Craig’s fourth Bond film, Spectre, premiered in 2015. In 2006, he joined the Academy of Motion Picture Arts and Sciences. Since taking the role of Bond, he has continued to star in other films, including the World War II film Defiance 2008, science fiction Western Cowboys & Aliens (2011), the English-language adaptation of Stieg Larsson’s mystery thriller The Girl with the Dragon Tattoo (2011), and Steven Soderbergh’s heist film Logan Lucky 2017. Craig also made a guest appearance as Bond in the opening ceremony of the London 2012 Olympic Games, alongside Queen Elizabeth II.