Oprah Winfrey (full name: Orpah Gail Winfrey) is an American media proprietor, actress, talk show host, producer and philanthropist from Kosciusko, Mississippi. She is an international celebrity most known for her show The Oprah Winfrey Show. Nicknamed as the “Queen of All Media”, Oprah became North America’s first black multi-billionaire and has been ranked the greatest black philanthropist in American history.

She stands at a height of 1.69 meters. Her hair color is black which is maintained by her personal hair stylist, Nicole Mangrum. However, details regarding Oprah actual weight is currently not publicly available. We are keeping tabs and will update Oprah weight information once it is out.

Oprah was sent to live with her father, Vernon Winfrey who was quite the strict one. He made education her first priority and enrolled her at Nashville East High School. It was during her high-school that Oprah got a job in radio.

Oprah was also elected school president and met with President Richard Nixon being a part of public speaking classes in her high-school. It was during the last year of high school while she was rehearsing with her drama class that a local radio station, WVOL spotted her and asked her if she would like to read on radio. Oprah was then given a job reading the news on the radio.

Oprah was born to Vernita Lee and Vernon Winfrey. At the time of her birth, Oprah’s mother was a teenager and was unmarried. Her mother was born in 1935 and passed away in 2018. She spent her life as a housemaid. Her father, Vernon Winfrey (born in 1933) worked as a coal miner before turning to be a city councilman who had been in the Armed Forces when she was born.

Despite her wealth now, Oprah was born in an economically troubled neighborhood and to a teen-aged mother. She left young Oprah traveled to the north leaving her daughter in the hands of her mother (Oprah’s grandmother), Hatti Mae Lee. Living with her grandmother, Winfrey lived in terrible conditions: her only friends were farm animals.

She was quite imaginative since her young days. She would frequently give the animals dramatic parts and included them in games. This was perhaps where she had gotten the craze for acting, and would soon be seen in legendary masterpieces such as The Color Purple.

Because of her grandmother’s values, Oprah had religion and God instilled in her at a very young age. During church, she would often recite poems and Bible verses. Soon the church and the entire neighbourhood knew she had a gift and was nicknamed, “The Little Speaker”. It would soon prompt her to become a woman with a strong perspective, which millions across the world would want to have insight on. This prepared her for The Oprah Winfrey Show which started airing in 1986.

She got into a romantic partnership with Stedman Graham, an educator, author, businessman, speaker and podcaster with whom they have been together for over thirty years but have never tied the knot officially.

The celebrated billionaire, Oprah has no child. She, however, had a son when she was 14 years old after being molested. He was born in 1968 but sadly passed on the same year.

The award-winning talk show host, Oprah, has an estimated net worth of $2.8 billion which she has earned through her successful career as a media proprietor, actress, talk show host and producer. She is one of the richest and most powerful American women.

Here are some interesting facts you don’t want to miss about Oprah.

At first, she wasn’t certain of what she wanted to do though she knew it was something to do with speaking or drama. She got elected as the school president and met with President Richard Nixon being a part of public speaking classes in her high-school. During her last year of high school as she was rehearsing with her drama class, a local radio station, WVOL spotted her and asked her if she would have like to read on radio. She took up the job

During her studies at the University, Oprah got a job offer to be a co-anchor on the CBS television station. She declined several times before being convinced by her speech professor that it may be the ultimate step to launch her career. Oprah wanted to find work outside of Nashville Tennessee and was soon offered a job in Baltimore, Maryland. The job offer came up a few months before her graduation and she had to choose between the job and graduating, so she decided to choose the job in Maryland as the offer was very tempting.

At the job in Maryland, she wasn’t a very good reporter and was shortly fired. Oprah’s boss set her up as a talk show host on a morning talk show called, People Are Talking in 1978. Immediately after the first show, Oprah knew that that was what she wanted to do for the rest of her life. She strengthened the talk show for seven years and then she decided it was time to move on.

In 1981, Oprah Winfrey sent recorded tapes of the show to a talk-show in Chicago called “A.M. Chicago” who immediately offered her the job. It soon became the No. 1 local talk show and in September of 1985 the name of the show changed to, “The Oprah Winfrey Show”.

The first broadcast of The Oprah Winfrey Show was on September 8th, 1986. The Oprah Winfrey show first targeted women, however soon due to controversial topics and intriguing topics that Oprah brought on to the show it appealed to people of all genders, ethnics, and ages. Oprah promoted many things on her show such as books, movie releases all of which people were eager to know what her opinions were of them.

The show went on to become the highest-rated talk show in television history and that put made her famous. It also earned Oprah her first million as well as earning her prestigious awards such as Day Time Emmy Awards and several others. Winfrey expanded the Oprah Winfrey show and started releasing a monthly magazine: The Oprah Magazine with the first issue being in the year 2000.

In 1985, she debuted her acting prowess in the drama “The Color Purple.” For this, she was nominated for an Academy Award and a Golden Globe. She has appeared in various high-profile films, including 2018’s “A Wrinkle in Time” and 2014’s “Selma,” as well as prestige television series and plays.

She also has a radio channel, a cable channel by the name Oprah Winfrey Network (OWN) that she launched after partnering with Discovery Communications and is also involved in charity works. On June 15, 2018, Apple announced a multiyear content deal with Winfrey reportedly worth $1 billion.

Oprah has many multi million-dollar homes, at least 6. She spends most of her time in her 23,000-square-foot Montecito, California mansion that is also known as “the Promised Land.” She has another one in Maui, Hawaii for when she wishes to escape the fast-paced Californian lifestyle and a second Montecito home known as Seamair Farm Estate. 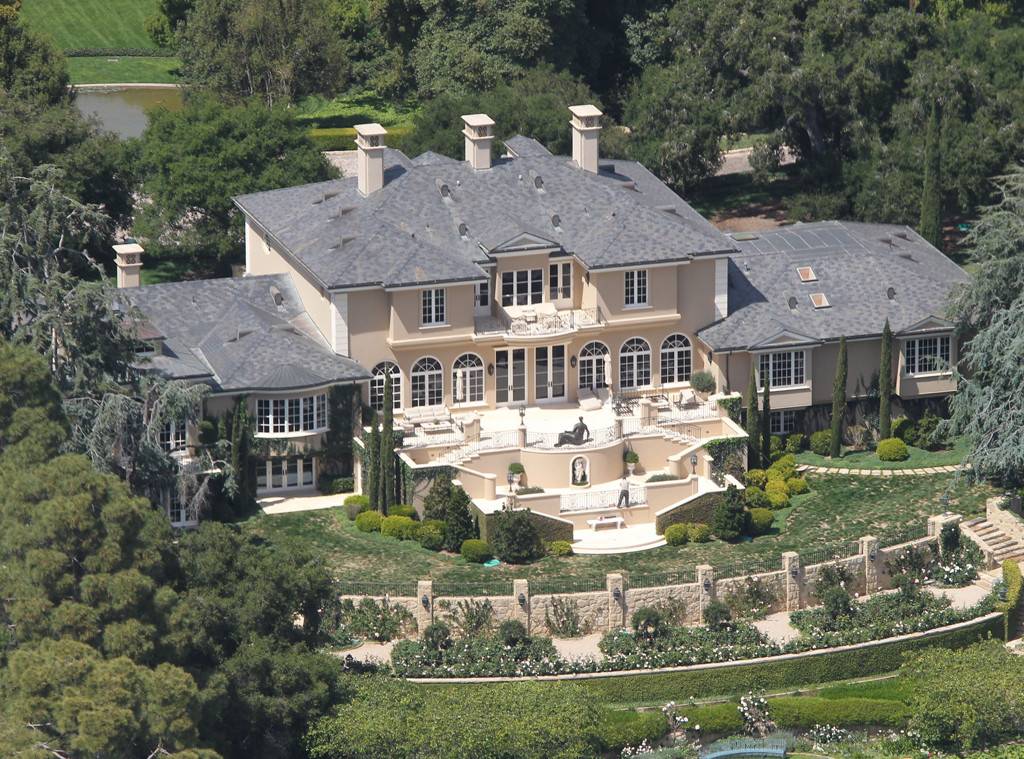 Winfrey bought another estate on Orcas Island in the Pacific Northwest of the United States and it is a 43-acre property. She bought it in May 2018 for $8.28 million. After selling her Chicago Water Tower Place Complex in 2017 for $4.625 million, Oprah went on to buy a $14 million ski chalet just a few months later.

The Promised Land is a mansion that is secluded in the hills. She bought the mansion in 2001 and reportedly paid $50 million for it. Now it is worth over $100 million.

It has a Neo-Georgian architecture design with 6 bedrooms, 14 bathrooms, a gourmet kitchen, 10 fireplaces, two home theaters (one inside and one outside), a large guesthouse with a private pool, a wine cellar and tennis courts.

Super Soul Sunday, her Emmy Award Winning show that is aired on the Oprah Winfrey Network is filmed under the massive oak trees located on this very property.

She also formerly owned dual Chicago condos — one with 4,607 square feet of space and the other 9,625.

To contact Oprah Winfrey, go to Oprah.com and click on Contact Us at the bottom of the screen. A new screen will appear with Oprah Winfrey’s The Life You Want Weekend. You then click on contact us @oprahweekend.com and submit your questions or request to purchase tickets.

This is a list of movies with Oprah Winfrey:

Oprah has authored and co – authored several books. Some of these books are

In 1996, Oprah started a book discussion club as a segment of the Oprah Winfrey Show. The segment highlighted a book selected by Oprah for readers to read each month. The segment was discontinued for one year in 2002 as Oprah could not keep up with the reading. It was revived with a limited number of books of three to four books in a year.

How Old is Oprah Winfrey?

Oprah is an American national born on 29th January 1954, in Kosciusko, Mississippi.

How Much Oprah Winfrey Worth?

Oprah Winfrey has an approximate net worth of $2.8 billion. This amount has been accrued from her media proprietor, actress, talk show host and producer roles.

Where Do Oprah Winfrey Live?

Oprah Winfrey live in her 23,000-square-foot Montecito, California mansion that is also known as “the Promised Land.” She has other houses that she lives in when she want to take a break from the fast paced California life.

How can I get a message to Oprah Winfrey?

How is Oprah Winfrey an entrepreneur?

Oprah started her own radio channel, a cable channel by the name Oprah Winfrey Network (OWN). Oprah is also the chairman of Harpo, Inc.